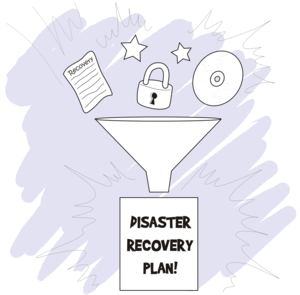 Cloud computing has gained popularity in recent years, but how does one truly define what this phenomenon is? Generally speaking, the best generic definition is one provided by the folks at pcmag.com, where they define “cloud computing” to be “…storing and accessing data and programs over the Internet instead of your computer’s hard drive.”  As IT professionals, this leads into many other mechanisms such as SaaS (email, games, virtual desktop),  PaaS (database, web server, development tools), and finally IaaS (servers, storage, load balancing).  As box stores have quickly found out, physical locations are expensive, and I began to wonder if the same could be said for separate disaster recovery premises.

The general public has become quite familiar with public cloud computing offerings such as gmail, and without realizing it have adapted well to being grouped with the masses.  As a corporation however, data integrity is crucial, and thus where private clouds have become advantageous.  Advantages of private clouds as compared to an on-prem solution have been defined to include lower capital requirements, faster production deployments as well as decreased recovery times.  And now as of recently, cloud solutions can meet the compliance and security requirements of mid to large sized enterprises, even those traded on multiple exchanges.

Attractive points for the cloud, which has caused me to reconsider my approach to disaster recovery include:

1)   Your environment runs on similar, if not identical, server hosts.  This eliminates the need to “stock up” on hardware models, and simply adding an additional host can easily expand your presence.
2)   The servers are virtualized!  This means you can eliminate (for the most part) the operating system as well as any additional software from the hardware equation.  You also no longer need to think about things such as power requirements, HVAC, and anti-static / anti-sprinkler locations.
3)   Ease of data retention and recovery.  Medium to large sized organizations have typically installed dedicated SAN and storage appliances.  Through virtualization via the cloud, now comes the benefit of data simply being in a “data state”, and not truly being accessed or defined based on the hardware platform of which it resides.  A cloud-based server can be all inclusively backed up via a snapshot, and therefore restored on another host very quickly.

The sole purpose behind disaster recovery co-locations was that your infrastructure, software, data, etc. were available elsewhere in the event of a catastrophic event.  Cloud based computing now grants us a number of new, flexible options depending on what our customer base defines as an acceptable downtime.

The most obvious benefit is data backup, which is off-site.  Up until a few years ago, the most efficient way to ensure data was backed up and safe was simply to copy it over to a second data centre in a geographically different location than where production resides.  In the event of a disaster, this method exposes risk to assuming that identical hardware to that of the production environment can be found, built, and have the data transferred back…all of which requires extensive recovery time.  Through the luxury of a virtualized host, this concern is now replaced with how many resources (cpu, memory, disk) do we want to throw at the new instance?

There are many permutations and combinations to a DR plan but now through potentially a hybrid cloud based solution that includes both on premises and virtualization, recovery time as well as cost can be reduced resulting in a happier customer base, and geographically less requirement on physical real estate.  All of this translates into lower costs for your department, and increased reliability.