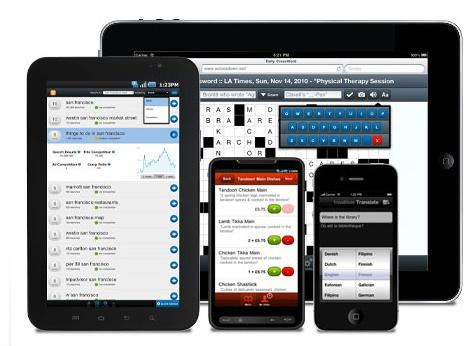 There was a time where having a web site was a nice-to-have.  It really meant nothing more than a place to put your business contact information, and a brief statement about what you offered.  With the consumer-backed popularity explosion of smart phones and tablet computing in recent years, a new market channel has been born, and along with it a 24/7 information stream.  There are an infinite number of possibilities for mobile applications.  Within this blog post, I only explore the risks associated with your enterprise ignoring this mechanism in the consumer’s never ending search for knowledge.

In an article published on December 15, 2013 by Business Insider, “By the end of 2013, global smartphone penetration will have exploded from 5% of the global population in 2009, to 22%.  That’s an increase of nearly 1.3 billion smartphones in four years.”  They go on to recognize that tablets have endured a faster adoption rate in half of the time of smart phones.  Trailing behind both of these technologies is the PC.  It is my opinion that because of such hardware adoption rates, the Internet is now accessible outside of the average homeowner’s house or business office, making it geographically and demographically limitless.

Upon the release of the first enterprise mobile applications, they were being considered as the “new corporate website” for those who insisted they were on the leading edge of their industry.  The applications exponentially increased in popularity soon after, as the level of effort for internal operations now required much less effort, and essentially became timeless.  Take for instance, tasks such as emailing and/or phoning a Project Manager to receive an update on specific tasks.  If the PM is not sitting behind their keyboard or waiting for your call at the time of your inquiry, who knows the length of time for a response. Now the data can be viewed in real-time through integrated project management applications.  Or perhaps a quick view of your network nodes to ensure everything is up and functioning properly during a monthly scheduled change window.  Mobile applications have obviously provided a unique touch-point to unlimited data.

With the advent of mobile applications however, comes a new technology requirement in their creation.  The development of these applications typically always involves the efforts of a programmer and can be expensive and time-consuming.  Not to mention the requirement to keep content fresh, and keep your audience constantly engaged through technology updates and new features as they become available.  Furthermore, unless you limit the scope of your audience to a specific hardware technology, a mobile app must be made for each device being considered, Android, iPhone, Windows, etc.

Although the list of cons above, are not to be seen as insignificant, I do believe the pros far out-weigh them.  Given that the majority of the population has gravitated towards smartphone technology, mobile apps keep your brand prominent as the devices are always at hand.  Users tend to spend more time on apps rather than websites, most likely because of their unlimited availability in that mobile devices will follow you everywhere.  Unless you have specific data transfer requirements, mobile applications are available off-line.  This can be a huge positive should your website ever be compromised due to unwanted activity, or simply a failure of some kind.  Once a customer downloads and installs your application, you now have “an in” or a conduit to that individual via their device.  You can push information at anytime to the application, and chances are whenever someone sees an update to an existing application, curiosity will get the better of them as they launch it to see what is new.  Applications are seen as a cheaper alternative to the cost of printing and mailing out brochures, catalogs, or glossy data sheets.  And of course, finally, the environmentally friendly aspect in that mobile apps create less need for paper based hard copies.

Websites are limited in what they can do, and whom you can target.  Mobile apps present themselves in a data-without-boundaries method, in turn offering you and your customer a more immersive experience.  Backed with creative thinking and proactive interactivity, mobile apps go a long way in improving upon your business goals.